About Us - Caligari Hardware

An independent hardware store serving the Lenox and Gt. Barrington communities since 1961. 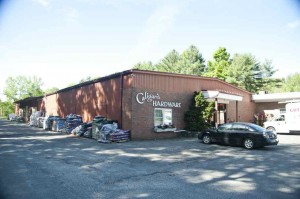 Caligari’s is proud to be a leading Berkshire retailer, serving the Lenox and Great Barrington MA communities. Since 1898 we have been here to serve you for all your home and business hardware, paint and decorating needs.

As your local Ace Hardware, our store is a member of the largest retailer-owned hardware cooperative in the industry. Ace Hardware began as a small chain of stores in 1924 and has grown to include more than 4,600 stores in 50 states and more than 70 countries. As part of a cooperative, every Ace Hardware store is independently owned. From neighborhood hardware stores to lumberyards to super-size home centers, each Ace Hardware is unique and tailored to meet the needs of its local community. We are all committed to being “the Helpful Place” by offering our customers knowledgeable advice, helpful service and quality products. As the helpful hardware folks in your community, we promise that, “helping you is the most important thing we have to do today.”

In 1898, E. Caligari & Son had its auspicious beginning when Eugene Caligari, newly arrived from Chiavenna, Italy, embarked upon the American dream of owning his own business. Early on, Eugene and his son, Eugene, Jr., learned every aspect of the painting business, they learned quickly that hard work is rewarded by loyal customers. Their honesty and hard work gave them the sizable following of customers needed to start their own company.
Soon another son, William, joined his father in the business. Young Bill learned the painting trade and continued to build a strong customer base, expanding into other businesses in the 1970’s. He married Patricia Dewey and took over the management of the business from his elderly father who ultimately passed away at 96 years of age.
Bill’s two sons, Jeffrey and William, Jr. representing a third generation, now own and operate the business begun over a century ago by their grandfather. Jeffrey joined the company in 1975 and William Jr. in 1989.
William Sr. passed away in 2000 and Patricia in 2009. The brothers have expanded the operation to other businesses, which are listed below.
All-In-One Solution For Your Home & Decorating Needs • 224 Housatonic Street • Lenox MA • T:413-637-0488 Contact Us